The triple jeopardy of Anite’s sychophancy

THE recent chaotic scenes of Ugandan paliamentarians embroiled in fist fights was something to behold. The cause of this stand-off was the bid to amend article 102b of Uganda’s constitution – i.e. to remove presidential term limits. This would ultimately allow the current president, who forcefully took over power 31 years ago, to rule Uganda for life.

As Ugandans across the globe, digested these sad events, the story emerged of Evelyn Anite, the youthful minister of state for finance and MP for youth (North) threatening opposition with a genocide: “We are the party in government…” she asserts, “We have the support of the magye (military)”. To pound the point home. During the following couple of days, we saw the magye at work – arrests, incarceration, grenade attacks and hospitalization of opposition politicians.  So, Anite’s threat is real.

Just to prove who holds the power, a few days later, on Uganda’s 55 birthday, Anite was seen being carried shoulder-high, by powerful looking kanyamas with: ‘Amend article 102b’ inscribed on their chests. 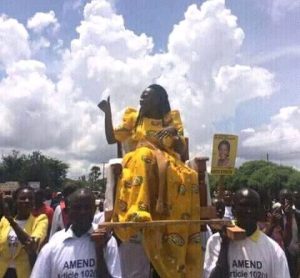 That Anite has become the epitomic conduit of the dangerously despotic regime says something about how entrenched the hegemony of the regime is. The significance of strategic sycophancy in a political culture of patronage and survival, cannot be underestimated – especially if it envelops the centre – buffering it from external discord. The picture of Anite carried shoulder-high is an ‘in-your-face’ statement of arrogance and impunity of the current regime.

Now, juxtapose this picture with her antics in 2014, on her knees, at the NRM caucus, begging for Museveni to stand as the sole candidate for the upcoming elections. He did and they won… and the then 27-year-old has since become an MP and state minister while her husband got promoted as RDC. 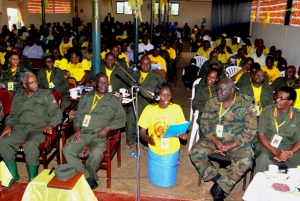 Anite’s advancements and sycophantic behavior is manifestation of the tokenism, nepotism, sectarianism, that underlay the state’s opacity. While underlings, like Anite stoop to scoop, our beloved country spirals to obscene levels of obsequence, corruption, opacity and prevarication. The peril is grand and complex but suffice to mention three with Anite in mind.

As an MP for YOUTH (Northern Uganda), she carries the hopes and aspirations of the numerous young people of the country. As we also know, Uganda has the leading youth population in the world today, with over 69% of its population under the age of 24. (49.9. % below the age of 15). Needless to say all of these have never experienced any other leadership other than Museveni’s. Anite herself was only 2 years old when Museveni forcefully took over power. The democratic and demographic ramifications are grave but that is not all.

As a FEMALE legislator and political leader she carries the hopes of more than half the population of Uganda. The sex ratio is currently at 51%. Numerous studies show that women generally and female politicians in particular are under-functioning in multiple arenas that are festering with the hegemony of patriarchy. This is a debilitating environment, especially politically, despite and because of the tokenism of affirmative action. Position and numbers without Power is, well – byoya byanswa. The few that wield power are either sold out or must face dire  consequences from their kind, the men and society that do not envision women in public places ( e.g. Turinawe breast Assault; Zaina Fatuma stripping, etc). So, to have a women so vocal, powerful and assertive is beautiful to watch – if only…

There is a third hazard – and forgive the parochialism, it is our reality – which is the fact that Anite comes from the NORTH, (more specifically from Idi Amin Dada’s hometown). Now this has two ramifications. Todate, Northerners, or ‘anyanyas’, as we are sometimes callously called, are still paying for the ‘sins’ of our previous leaders – One example is in the distributive injustice of development projects – for instance, compare the rate of development for instance between Koboko (where Anite comes from; or neighbouring, Yumbe where I come from) and Mbarara (where Museveni hails from) and judge for yourself. Coming from the North is often synonymous with being underdeveloped and marginalized. The pool of champions and role-models is dismal.

So ‘Aniteism’; ‘Musevenism for life’ is just bad news, an eternal condemnation, a triple jeopardy, particularly for the youth, women and Northerners.

This entry was posted in Uncategorized. Bookmark the permalink.